It’s taken me THIS LONG to get to Bernardine Evaristo’s Girl, Woman, Other (which won the Booker Prize) and it’s absolutely mind-blowingly good so far. I love love love her flowing, multi-focal style and the voices of each character is so unique and interesting I love them all! // #bookstagram #igreads
Finished this collection earlier today and absolutely loved it. The range of essays in here was phenomenal 💛 It was nice to break away from the news and weight of everything to enjoy these pieces. Highly recommend if you love narrative-driven personal essays. // #bookstagram #igreads
I made a tiny macrame wall hanging for one of my dogs’ gallery wall. Because I use my break time wisely 😂 Notes for future tiny macrame: make the strings much longer, as I ran out of string way sooner than I intended. I still have to wet/block it so the tassels hang straight. // #stayhome
Social distancing // #asidefrompopcorn
Honestly, having these two weirdos around during this time has made things so much better. Even when Pooh gets in the way of my macrame.
Trying out this standing desk situation. I’ve been putting off the @catapult anthology because I’ve been so eager to save it but it’s about time to start 💛

My Tweets
Skip to content
Press Enter / Return to begin your search.

There were a number of great books and great authors that I read in 2017, but there was one particular author who captured my heart in 2017 and who quickly became one of my favorite authors ever: Maggie Nelson. Like most people on social media, I became aware of Maggie Nelson when her text The Argonauts began popping up all over Instagram, review lists, and even Emma Watson’s online book club, Our Shared Shelf. Like a lot of other people within the online space, I become aware of books existing long before I actually get around to reading them. The Argonauts cover always caught my eye — the bright pink against the matte black remains became pretty ubiquitous on book blogs — but it wasn’t until a friend of mine actually made me open up the book in the summer of 2017 that I finally read something by Nelson. And from there, I subsequently became hooked on her writing.

Since The Argonauts was the first book I ever read by Nelson, I think it is fitting to begin with this text. But before I move on, I want to touch on my own reading preferences as part of my own reflection on why Nelson managed to bewitch me so fully in 2017. In general, I am not one to gravitate towards memoir and I definitely am not someone who really can get into poetry. However, the more I read prose by poets, the more I realize that poets write some of the best prose that I have encountered. So, I suppose what we can take away from this is that I like a sort of poetics in prose, but if you present the poetics in the form of poetry — you lose me, for some reason. This style of writing (a poetic prose approach?) is different from a “prose poem”, I think, and Maggie Nelson strikes this poetic approach to prose in a way that really resonates with me. As of yet, I haven’t found another author who writes quite in this way, which just happens to tick off a lot of boxes for my soul.

Another element of Nelson’s writing that had me hooked was her organic way of weaving in theory throughout her very personal reflections. As someone who absolutely loves what maybe we would call “academic” literary theory (and, really, any literary apparatus that helps us try to make sense of life), I love coming across authors who are able to make use of these ideas in a generative way. The only other time I encountered a similar, though admittedly also markedly different, weaving in of theory into writing was in China Mieville’s Embassytown, in terms of Mieville’s use of semiotics and linguistics to create an insanely cool alien landscape. What Nelson does differently with theory though, particularly in The Argonauts, is to engage with these ideas head-on and take their predicates at face value to see what comes of them when applied to lived experience. Although a lot of literary theory seems so dry and so far removed from life, it’s important to remember that, at the end of the day, most of theory is dealing with living, breathing human beings — or non-human persons, sometimes. Nelson takes the embodiment at the base of various theoretical approaches and includes them as avenues for reflection, sometimes leading to some sort of small revelation about herself or the world, or sometimes revealing the cracks in the theories themselves once they are applied to life. I also feel that her use of theory is very genuine. These “buzzword” ideas are not included as a way of obfuscating meaning or excluding certain people who “are not in the know”; Nelson does not assume you know what she is talking about, nor does she punish readers who may not be familiar with some of these theories. The Argonauts was great because she actually included the theorist beside her mention of the theory, so you are able to look up an idea if you were unfamiliar with it — or you can have a nice little moment of camaraderie when you see that another person also enjoys the same theorists you do. She uses ideas that are, more often than not, used to bar access to certain spaces and instead uses them to welcome more people in. 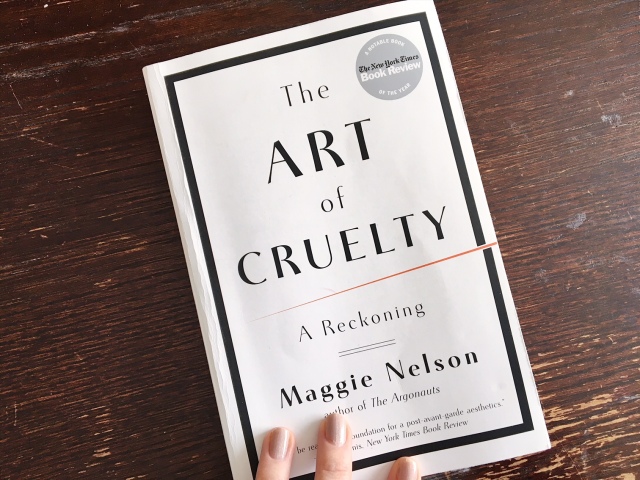 While engaging with theories and reanimating them by taking them to task, Nelson also somehow manages to remain open to anything these theories may show her; rather than coming to you, as the reader, with a set Idea that she wants to impart to you, she seems to be thinking through things with us along for the ride. I also think there is a very real warmth and compassion in her writing, which is part of what drew me to reading her other works, The Art of Cruelty and The Red Parts, both of which handle subjects that initially seem so far removed from the material she covered in The Argonauts. But more than anyone, I trusted Nelson to take me along through the darker elements of the world/art without getting side-tracked by sensationalism and, for lack of a better phrase, “the obvious”. You can argue that an excursion through cruelty or a murder trial (or both, in The Red Parts) can lead to some possibly obvious conclusions — this is bad, this has to be the line we draw, this behavior is questionable, etc. — but Nelson, as usual, is great at taking ideas or people at their word and questioning them to the point that we, the readers, somehow end up in a better place than when we started…even if we don’t personally ‘agree’ with (or even like) the piece of art she is discussing or the behaviors of the people she analyzes. I feel that Nelson has the ability to get Something out of everything we encounter in life, whether a pleasurable or a miserable experience, and then articulate it in a way that allows me — a third party viewer — to participate in some way.

If I had to rank Maggie Nelson’s work, I honestly don’t think I could produce a meaningful list. For one thing, I have not read her books of poetry aside from Bluets — so I have to omit a significant chunk of her work, which seems unfair to her. The four texts I have read are also so different from one another that it is hard for me to say where someone should start, since all four texts did something for me that I really enjoyed. But, for the sake of some sort of “review” here I will try a pseudo-ranking, though really it’s more of a suggested timeline: I say read The Argonauts first if you want to be part of the conversation about her writing, since this is the book that I think made her name a little more commonplace — plus her handling of love and family is stunning. Then I think you should read Bluets because it is beautiful, but also short, so you can read it quickly. Then I think you should read The Red Parts because it showcases her amazing ability with memoir writing; the way she moves so fluidly between the narrative of the trial itself and then her own memories, along with the family histories she relates to us, is excellently done on a formal level. Finally, you can read The Art of Cruelty if you want to hear her work through an idea and use visual/performance art as a medium to get to some sort of understanding of what cruelty is and what it can do. It’s an interesting premise and, again, her compassionate handling of the art, the artists, and the possible repercussions of cruelty in terms of victims, is handled well.

I am happy that I discovered Maggie Nelson in 2017 and I am eagerly awaiting whatever she puts out next!

View all posts by Julia Megumi